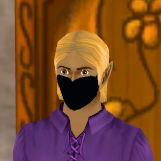 High Explosive Mine - Not quite getting the expected damage